Dear children, let us not love with words or speech, but with actions and in truth. 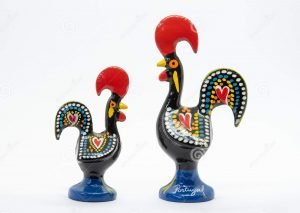 When I travel to Portugal, I was very excited to visit the Shrine of Our Lady of Fatima; hear more about the and home of the legendary soccer player Cristiano Ronaldo and learn more about him, and taste the original Piri-Piri chicken with their famous wines. But what caught my attention was this very colorful rooster that is just everywhere that I really got curious and this turned out to be a significant part of Portugal, especially the City of Barcelos.

This rooster is called the “Rooster of Barcelos,” or in Portugal, it’s known as “Galo de Barcelos,” which directly translates to Barcelos rooster or cockerel. However, foreigners tend to call the Portuguese rooster instead. And there is a legendary story behind this though there are many different versions; this is what I got.

A great knight was traveling to Santiago de Compostela and stopped by the City of Barcelos for the night. A rich man was having a festive night and invited the great knight to join him for the celebration. However, that night all the silver in the city was stolen, and as the only visitor in the city, the great knight was accused as the thief and was immediately sentenced to death by hanging despite his pleas of innocence.

Before his execution, the great knight asked to be taken to the judge who sentenced him. The authorities honored his request and took him to the magistrate’s house, holding a banquet with some friends. Affirming his innocence, the man pointed to a roasted rooster on top of the banquet table and exclaimed, “It is as certain that I am innocent as that rooster will crow when they hang me.” The judge pushed aside his plate, deciding not to eat the rooster, but otherwise ignored the appeal.

The great knight was then taken to the gallows by the authorities, and at the moment of hanging, what seemed impossible happened.  The roasted rooster stood up on the table and crowed as predicted. Understanding his error, the judge ran to the gallows to discover that the man had been saved from being hanged thanks to a poorly made knot in the rope. The rope was around his neck, but the knot loosened and protected the knight from being strangled. The man was immediately freed and sent off in peace.

After being released, the great knight immediately continued his way to Santiago. The legend also says that years later, the same great knight returned to Barcelos and erected a monument (a stone cross) related to these events – Monument of Senhor do Galo in praise of the Virgin Mary and Santiago Maior.

In Portugal, the Rooster of Barcelos is a symbol of faith, good luck, and justice and has been the national symbol of Portugal. 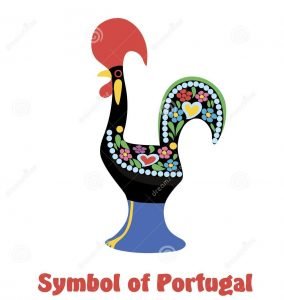