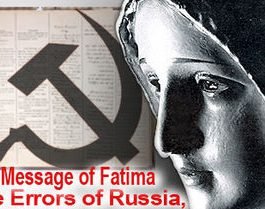 Red October is another name for the October Revolution of 1917 in Russia. As you know, this was the same year Our Lady of Fatima’s warning came:

“[God] is about to punish the world for its crimes,” Our Lady of Fatima warned on July 13, 1917, “by means of war, hunger, and persecutions of the Church….  To prevent this, I shall come to ask for the consecration of Russia to My Immaculate Heart, and the Communion of Reparation on the First Saturdays. If My requests are heeded, Russia will be converted, and there will be peace; if not, she will spread her errors throughout the world, causing wars and persecutions of the Church.”

But, what, then, are the “errors of Russia” as they were developing at the time of the Bolshevik-Russian Revolution shortly after the Fatima apparitions? It would seem that they include, among other things, the following list of characteristics:

A reductively atheistic materialist world-view which aims at undermining anything Christian in society;
An ideology that is disconnected from Truth and reality;
A revolutionary socialistic spirit that undermines especially major aspects of family life – especially with the help of feminism, divorce, and abortion;
A disregard for tradition and the traditional institutions of society as “counter-revolutionary forces”;
A deceitful misuse of language with the intent to manipulate the public;
A method of branding one’s opponents with sweeping and demeaning epithets that abstractly categorize them as “right-wing” or “counter-revolutionary”;
Toward more moderate and compromising opponents, one first try to incorporate them into the professed new system to use them as Lenin’s “useful idiots” in the sense that they help give to the world the illusory idea that nothing has changed;
As the last element – but of course a very important and painful one for those who lived under Communism – there is a constant sense of distrust and fear, unto the imprisonment and killing of one’s intransigent opponents.

Without a doubt, both inside and outside the Church, we are witnessing an explosion of these “errors of Russia.”

Today (October 6) is Day One of the Amazon Synod, which goes until October 27. While these errors are shockingly replete within the culture – surging, especially, in the past two years – the faithful are aghast as they see, what seems to be, a cabal looking to usher in a completely deformed version of the Catholic Church, which seems to emulate the “errors of Russia.” Are we heading into another “Red October”?

For those who have read Fr Richard Heilman’s writings, he has been given specific signs and warnings. For the sake of brevity,  Fr. Heilman’s outlined those here:

October 13, 1884 – Pope Leo XIII receives the vision of our Lord and Satan discussing Satan’s claim that he can destroy the Church. He is given as much as 100 years and “greater power.”
October 13, 1917 – Exactly 33 years (the span of Christ’s life) from Pope Leo XIII’s vision,  Our Lady of Fatima concludes her warnings by pointing to a supernatural phenomenon of the “Miracle of the Sun.”
I am of the school of thought that believes the 100 years of “Satan’s greater power” began with our Lady’s warning in 1917. And, as we can see, the Russian Revolution (AKA, “Red October”) began that same year.
Having traversed through two historically deadly world wars, which seemed to draw people closer to their faith, Satan seems to shift gears, at the midpoint of his 100-year reign and unleashes one of the most powerfully decadent movements – the sexual revolution. Also, at the midpoint, the Second Vatican Council occurs, which would “revolutionize” the direction of the Catholic Church toward a more materialistic direction. Satan seems to “up his game” as he sees half of his time expired.
2017 – Satan’s 100-year reign concludes, as a powerful remnant rises with a strong faith in the supernatural … Satan no longer has a “greater power” than this “believing” remnant. Yet, why does it seem Satan is more active than ever? Because he knows he is losing, and he is in full-on panic mode, throwing everything, including the kitchen sink, to regain power. This is only exposing his tactics more, and aiding to embolden a quickly growing army whose “courage is awakening.”
With that courage awakened, God is calling us to do battle.

Again, for the sake of brevity, I will simply point you to the article referring to the “Revelation 12 Sign”. In that article, I pointed to the fact that this occurred on the Feast of St. Padre Pio (September 23) in the centennial year of Fatima. I believe we have been shown that Padre Pio is a mighty saint for our times. And, his great love for the Sacred Heart, coupled with his use of the Sacred Heart Novena prayer he would use to pray for others and be granted a multitude of miracles, was also meant for us to “take notice.”

The essence of the “errors of Russia” is a dismissal of the supernatural. THIS, my friends, is the battle we are fighting. I believe Padre Pio, and the Sacred Heart Novena prayer are meant to restore our confidence and trust in the supernatural.

So, what can we do? Heed the signs and warnings we have been given. So, as we enter “Red October,” and the frightening Amazon Synod, we need to …

Pray With All Our Hearts – Immaculate Heart, Sacred Heart

God may be calling you to more than this, and that is wonderful. But, I believe, during this Red October, we must heed these six essentials. So, when you pray your daily rosary, please do it this way during October …

Please include the following intention in the Sacred Heart Novena Prayer: “For Cardinal Burke and Bishop Schneider’s intentions for the Amazon Synod.”

O my Jesus, You have said: “Truly I say to you, ask and you will receive, seek and you will find, knock and it will be opened to you.” Behold I knock, I seek and ask for the grace of (here name your request). Our Father … Hail Mary … Glory Be … Sacred Heart of Jesus, I place all my trust in You.

O my Jesus, You have said: “Truly I say to you, if you ask anything of the Father in My name, He will give it to you.” Behold, in Your name, I ask the Father for the grace of (here name your request). Our Father … Hail Mary … Glory Be … Sacred Heart of Jesus, I place all my trust in You.

O my Jesus, You have said: “Truly I say to you, heaven and earth will pass away but My words will not pass away.” Encouraged by Your infallible words I now ask for the grace of (here name your request). Our Father … Hail Mary … Glory Be … Sacred Heart of Jesus, I place all my trust in You.

O Sacred Heart of Jesus, for whom it is impossible not to have compassion on the afflicted, have pity on us miserable sinners and grant us the grace which we ask of You, through the Sorrowful and Immaculate Heart of Mary, Your tender Mother and ours.

Say the Hail, Holy Queen and add: “St. Joseph, foster father of Jesus, pray for us.”

Cardinal Burke and Bishop Schneider’s intentions: 1) that the theological errors and heresies inserted in the Instrumentum Laboris may not be approved during the synodal assembly; 2) that particularly Pope Francis, in the exercise of the Petrine ministry, may confirm his brethren in the faith by an unambiguous rejection of the errors of the Instrumentum Laboris and that he may not consent to the abolition of priestly celibacy in the Latin Church by introducing the praxis of the ordination of married men, the so-called “viri probati”, to the Holy Priesthood.