Fighting a Spiritual Battle? Don’t Forget to put on the Armor of God 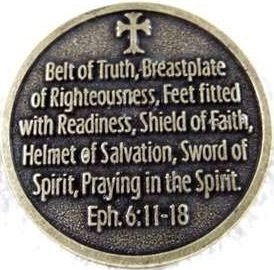 Don’t Forget to put on the Armor of God

[The Lord] put on righteousness as a breastplate, and a helmet of salvation upon his head; He put on garments of vengeance for clothing and wrapped himself in fury as a mantle

St. Paul used the armor of a Roman soldier to symbolize what is needed to serve in God’s army.

In his letter to the Ephesians, St. Paul by encourages the Christian community to “be strong in the Lord and in the strength of his might. “For everyone put on the whole armor of God and stand against the wiles of the devil” (Ephesians 6:10-11).

St. Paul then goes on to list the various components of this spiritual armor.

Stand therefore, having girded your loins with truth, and having put on the breastplate of righteousness, and having shod your feet with the equipment of the gospel of peace; above all taking the shield of faith, with which you can quench all the flaming darts of the evil one. And take the helmet of salvation, and the sword of the Spirit, which is the word of God (Ephesians 6:14-17).

The armor of God is frequently seen in religious art, as well as in representations of St. Paul. St. Paul used this comparison to connect with his audience on at least two different levels.

The city of Ephesus was a leading city in the Roman Empire and a commercial center of the region. The presence of the Romans are seen in Ephesus, the people are familiar with the armor of a typical Roman soldier; Ephesus hosts gladiatorial fights in its stadium and the residents knew well the fierce battles that took place there.

The Jewish people of the city were also been familiar with the divine armor that is mentioned in the Old Testament, St. Paul draws from this passage in Isaiah:

[The Lord] put on righteousness as a breastplate, and a helmet of salvation upon his head; He put on garments of vengeance for clothing and wrapped himself in fury as a mantle (Isaiah 59:17).

The terminology can also be seen in the Book of Wisdom, in another passage that St. Paul was alluding to:

The Lord will take his zeal as his whole armor, and will arm all creation to repel his enemies; He will put on righteousness as a breastplate, and wear impartial justice as a helmet; He will take holiness as an invincible shield, and sharpen stern wrath for a sword, and creation will join him to fight against the madmen” (Wisdom 5:17-20).

The shield and sword are two of the most essential parts of the armor of God which represents faith and the Gospels (and the Bible in general), respectively. This is highlighted when viewed in the Roman military context, as “when a legionary charged with the shield, he would … run towards the enemy with full force in an attempt to knock his foe over. He would then kneel behind the shield and fight from behind it.” Faith is a central part of St. Paul’s teachings and so it is fitting that he wrote about the “shield of faith” to be used in spiritual combat.

We often underestimate the spiritual aspects of our battles in life. But the armor of God — with truth, righteousness, peace, faith, salvation, and the Word of God — is a sure path to victory over our spiritual enemies.

The Prayer, Spiritual Armor of Prayer

Heavenly Father We ask You today for Your truth, As a belt tight around our waists.
We put on the zeal, To announce Your good news of peace, As shoes for our feet.
We put on Your righteousness, O Christ, as our breastplate. And the hope of salvation, As a helmet for our head.
Father we take up faith, As a shield which is able to put out, All the fiery darts of the enemy.
And the sword of the Spirit, Which is Your Word, O Lord.
Father may the love, With which You have loved Jesus, Be in us and may Jesus be in us.
We ask You for the grace, Of a servant heart.
Amen.

All prayers are from different sites of the internet and credits to all authors.

all pictures are from the internet.