You Are Invited. Will You Come? The kingdom of heaven may be likened to a king who gave a wedding feast for his son. 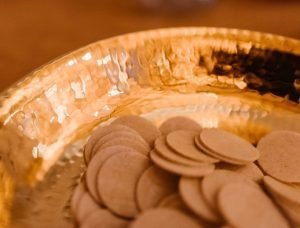 God is inviting us to a wedding feast. Will we go? 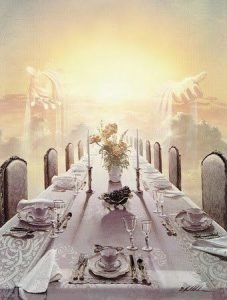 We find it much more difficult to see God’s invitation to Love and to respond to it.

We have heard these words so often throughout our lives that we sometimes take them for granted. But to appreciate this parable, we have to see it as our story, to know that we have been the recipients of God’s gracious hospitality and generosity — and not because of any good we may have done.  We claim no right, and we should feel privileged to find ourselves in the banquet hall.  We are from the highways and byways no longer.  Furthermore, we are honored, guests.

It should make a difference in our lives.  We have all received the invitation — an invitation not to a banquet, to but to live in its fullness. And if God is so willing to give of Himself — so totally — to us, what then is our responsibility in accepting that invitation?

The people invited to the wedding banquet of the Son refuse to come. 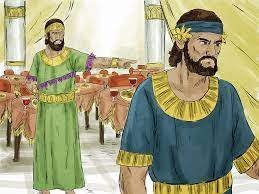 The guest list was drawn up ahead of time, and when the time came for the feast, they were notified that it was ready. But these guests refused to come. These special guests would be the Israelites expecting the Messiah; they claimed to be closely related to the King, God. But when the King prepared the banquet for his Son, they would not come.

The King graciously repeats the invitation.

The King extends his gracious invitation again, although this time he makes it even more appealing. He sent other messengers out to invite them also. This is so true of the way that the Lord calls people to himself, repeatedly and with all the incentives to appeal to people. In this parable, the motivations are portrayed in the description of the banquet. The word used to technically refer to a morning meal, like breakfast, but eaten mid-morning. However, the translation of “banquet” can be used because the wedding feasts often went on for days. So this would be the beginning of the days of feasting. And here there would be plenty to eat–the King says that his oxen and fattened cattle have been butchered, and everything is ready for the feast. What could be more appealing?–the King himself extends the invitation, it is for a joyful time of celebration, and there will be so much there to enjoy. One is amazed that the invitation needed to be repeated at all! The King’s invitation was both a great honor–and a sovereign command (one does not refuse the King).

Those who continue to refuse turn violent. The response to this second invitation is somewhat surprising. The people paid no attention to the messengers but went off on their own business. But others seized the messengers and mistreated them and killed them! The King was so outraged by they treated his messengers that he sent his army to destroy the murderers and burn their city.

In this context, the opposition to Jesus had grown violent, and Jesus warned his enemies of the coming judgment they would receive. So the focus of the parable, although severe, is true to history. The Hebrews had often harmed and killed the prophets that God sent to them, and they were about to do the same with Jesus. But to refuse the King and murder his messengers was the same as committing suicide. That would even have been true in their days. But in the story, this was not any king, but the King of Glory.

A survey of the Gospels as a whole is necessary to draw together the reasons for the Jews’ rejection and hatred of Jesus. Again and again, Jesus called them to come and follow him, and he would give them eternal rest. Their unbelief in him lay behind their refusal. But perhaps as the repeated appeals of Jesus made the call clearer to them–that Jesus was the divine Son of God, that they would have to submit to him, and that they could only enter the Kingdom of Heaven through repentance of their sins and faith in his provision–they became more aware of what he was saying about himself and therefore what he was speaking about them. Their violent response in killing the messengers the LORD sent anticipated their desire to kill Jesus–they did not want to hear any more of their guilt and his grace.

And so, just as Jesus explained in the last section, the kingdom would be taken from them and given to a people bearing fruit. Those who angrily refused the gracious invitation to the wedding feast would be insulting and minimizing the King, and so his wrath would fall on them.

The King invites as many as would come to the feast. 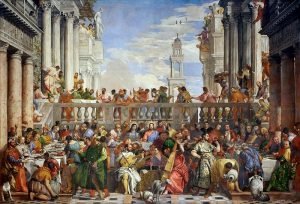 Because the ones who were invited refused to come, the king now turns to others. He sends his servants out into the streets to ask all they could find, whether good or bad. The banquet hall was soon filled with people wanting to share in the King’s wedding feast for his Son. The call is not for the wise, and the learned, certainly not for the smug and self-righteous, but for all who would come. He came into the world to seek and save that which was lost, not those who had rigorously kept the Law (or who said they did) and could claim to have the righteousness to enter the Messianic banquet. What is drawn into the hall are both good and bad people–but all in need of God’s invitation to escape the sin and bondage of this world.

The king expels anyone who did not prepare properly. 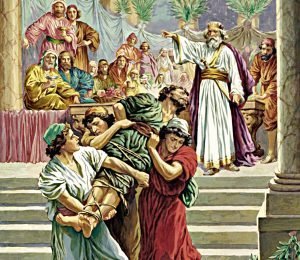 The parable tells how the King arrived to see the guests who wanted to be at the wedding feast for the Son. But he found a man who was not wearing the proper wedding clothes. The King addressed him as “Friend”–but did not be misled by this word in Jesus’ teaching, for when he called someone “friend,” it was always in an ironic sense, and an expression of judgment followed. Whenever Jesus called anyone “Friend,” he usually made it clear they were not. In our story, The King wanted to know how the man got in without the proper attire, but the man was speechless, a sign of his guilt.

The outcome of this man’s situation informs us of the true meaning of the symbolism. We have to say that the proper attire would correspond to all that Jesus said was required for entrance into the Kingdom of Heaven–true repentance for sin and faith in Christ, and then a commitment to love and obey the Lord as evidence of saving faith. In Jesus’ day, many people certainly wanted to enter the kingdom, but when Jesus started telling them to come to him and take his yoke upon them and learn of him, they went away. And in the day of judgment, many will claim to have done good deeds. Still, Jesus will turn them out because they will not have appropriately dealt with salvation’s primary issue–they will not be prepared properly and spiritually to be received by the King at Son’s wedding.

“For many are called, but few are chosen.”

The word “many” is not intended to be a restricted number to speak of those for whom Christ poured out his blood. The invitation has gone out to all who care to listen, but some just refused, and some wanted to come but refused to submit to the requirements of entrance into the kingdom. So none of these will be present in the kingdom. Jesus refers to as “chosen” are the people who respond to the invitation to come and respond properly so that they are prepared to enter the kingdom. Because the Bible refers to the recipients of grace as “chosen,” we may conclude that this intends to say that God is not surprise by the acceptance of some and the rejection of many–in other words, sovereign grace is still at work, even though on the human level we see how some refuse and some accept and prepare.

The invitation to the Messianic banquet had been extended to the Jews first, those who had the promise of the covenant, the kingdom, and the King, but they refused. But then Jesus began to turn to the Gentiles, and as many as believed in him would enter the kingdom in the place of the others, even if the ones who believed were formerly prostitutes and sinners rather than scholars and sages.

More people will reject the invitation or fail to meet the requirement of faith in Christ than those who are chosen, that is, those who genuinely believe and enter the kingdom.

In our day, the invitation goes out from the Church by the Spirit through the Church: “The Spirit and the bride say, ‘Come.’” And whosoever wills may come and drink of the water of life freely. Those who refuse, whether violently oppos to Christ, or pretending to be in Christ, will have no part in the kingdom but will be cast into outer darkness.

This is the message of the Gospel, the good news. It is only good news if salvation delivers us from darkness (if there is no darkness, no judgment, then there is no reason for good news). The Church must carry the invitation to the world, even if the world might refuse the invitation, or even treat them violently and kill them.

The story makes it clear that there is no reason, none at all, for people to reject a gracious invitation from the King to come to the wedding feast and enjoy all good things. The only reason they reject the invitation is that they do not believe the King, or they do not believe that Jesus is the Son of God. But since this is a call from the King, from God Himself, the people are not free to take it or leave it, even if they think they can be non-committal. To reject the invitation of God to share in the Kingdom is folly–it is to choose death; or, to leave the offer of grace is to reject God’s only provision for eternal life.